We "don't wear things in a vacuum."  There are many social and historical implications in what we wear.  See this thought-provoking article on cultural appropriation.

We can communicate so many things with our clothing and grooming: 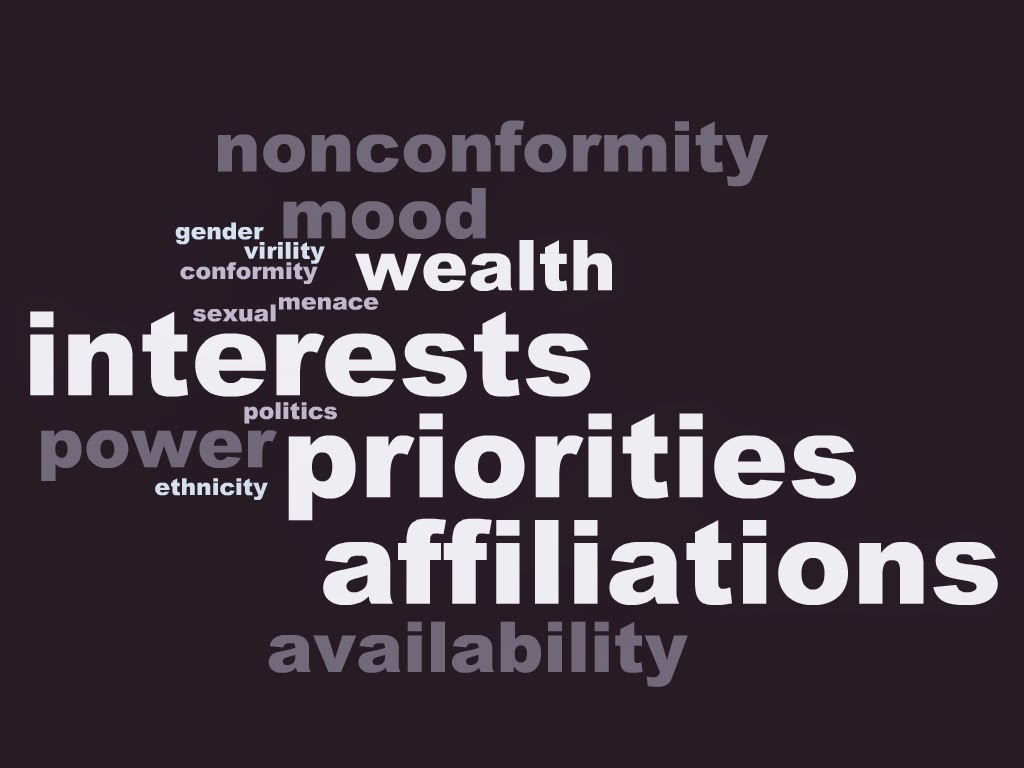 Something as simple as how much time and effort, time and money someone spends on their appearance tells others quite a lot about them.

The Kindest Husband in the World and I actually disagree on the topic of clothing, on many fronts.  He is not someone who puts much meaning in clothing and appearance, except to say that you dress to show respect.
You don’t go to a job interview in sweatpants and you don’t go to church in a sweater (it should be a button down shirt, preferably with a tie).  You don’t visit your in-laws in ripped jeans and you don’t wear your filthy project pants to a store, even Home Depot.

To me, this is a lot of don’t instead of do’s, and it sounds a lot like conformity, which I’m not a fan of.  Still, basic respect for others is never a bad starting point.

The scientific fact is that what we wear does not just affect what we communicate to others, but it changes how we see ourselves and even how we function.


You Shouldn't Be Surprised

I can remember living in Miami after the Overtown riots and finding myself on the “wrong” street from time to time.  I learned that while it could never be my FAULT if I were attacked*, I shouldn’t be surprised if I were in a place I knew I shouldn’t be.


It’s this shouldn’t be surprised element of clothing that I want to mention:

I can also remember in college getting asked out by a string of guys who expected a particular end on a first date and I was complaining to my friend.  He looked at me like I was a complete idiot and asked me what I thought I was communicating with the 1960s miniskirts.  It really wasn't my fault.  I'd just discovered the coolest vintage shop!

*Harassment. First of all, people are responsible for their own actions.  There’s no way around that.  And it is a fact that most women in most public places are harassed regardless of what they’re wearing.  There is NEVER a situation where clothing gives one person the right to another person's body!
One of the assertions of harassers is often that the victims are asking for sexual attention with the clothing they choose.  In some cases this may be true.  But an outfit that communicates you are available/open to a relationship is NOT the same thing as communicating that you want to be harassed, raped, groped, followed home, or even gaped at by strangers in a public place.


Our clothing and grooming choices do communicate something.

If this is true, is it interfering with our right to free speech to impose a uniform or a dress code at a school?  Kindest Husband in the World says no.  He says the right to free speech was supposed to protect the people from government-imposed silence on political topics.  I guess he's right: the legal description is "to express beliefs and ideas without unwarranted government restriction."


1.  Do dress codes amount to government restriction of an individual’s freedom to express beliefs and ideas?
We don't really have to decide whether dress is part of speech to answer this question.
While free public school is provided* in all 50 states, you are not required to attend.   Education is compulsory up to a certain age (varies by state), but may also be provided at private institutions or even at home.  The government cannot be restricting your rights if you don’t have to be there.

*The Universal Declaration of Human Rights affirms a right to education, but it is not part of the U.S. constitution.  That task is left to each state individually.
“States not only control access to education but also have the responsibility to provide every child with a free, appropriate education.” See an excellent discussion of this HERE.

2.  Do I have to follow the rules to stay at school?
Every educational, civic, privately owned place has rules. Most schools and many employers legally have a Non Fraternization rule, even off-campus.   If you want to be welcome there, you have to follow their rules.

Students can be disciplined or expelled for rule violation, but they have a right to “due process” or fair procedures.  Rules may not infringe on first amendment rights.
The ACLU can help students understand their rights.

Your school’s rules and policies are required to be reasonable and have a logical relationship to the school’s legitimate interests.


3.  Are dress codes reasonable and related to the school's interests (i.e. education and safety)?
They are intended to reduce visual distractions during lessons.  This is true whether we’re talking about a 30” rainbow spherical wig, menacing messages on T-shirts, 10” miniskirts, or facial tattoos.


3a. Are modesty dress codes an extension of a Non Fraternization policy?
Probably, though no one appears to be saying it out loud.


3b. Do modesty dress codes at school actually discourage off-campus sex?
Don’t ask me.  We had uniforms.  Everyone still knew who was sexually active and who was not. We all knew who was rich and who was not.   Goths wore spiky black hair with their plaid and old money their pearls.  We found ways to express ourselves within the parameters we had.  I still have a four inch marionette earring sculpture of Rhett Butler that I wore with my uniform to express my love of film and art.  I wonder if that distracted anyone?

Does my experience mean uniforms and dress codes are useless?  Not really.  Because when we were in class, we did focus on the lesson.  And that’s the whole point.  Maybe FEWER distractions* is a good thing.
*Though I've taken issue with that argument before, especially when it means the elimination of windows in classrooms.  Daylight--in spite of the supposed distraction--improves performance significantly.

4.   The manner used to disseminate policies and enforce them can be much more important than what the policies actually are.  Dress codes should be clear and include illustrations if they really want people to follow them.  For example, if we're going to measure how high above the knee a skirt is, we'd better know where on the knee that measurement is starting.
Regarding enforcement, the caption to the Thai image says that additional clothing was available for rent if you did not have it.  Just like a jacket and tie at a nice restaurant.  NOT like the "shame suit" that one young lady was directed to wear when her skirt didn't measure up (The school said they had problems with the borrowed clothes disappearing.  A deposit or rental fee might solve this easily.)

4a.  Dress codes should exhibit equality.  They should never imply that boys cannot control their sexual urges and it is up to girls to cover up their bodies so that the boys will not be tempted.  This furthers a culture of harassment and rape.
Dress codes should treat the genders equally.  If girls are not allowed to remove their shirts, then neither should boys.   Never imply that modesty is more important for women.
Rules should be equal, even if body type is not.  You cannot allow a thin girl to wear a low cut blouse if you do not allow it on a buxom girl.  While defining "too sexy for school" might tend to vary with body type, rules that are easy to follow cannot be applied or enforced on such subjective terms. Besides, young peoples' bodies are constantly changing.  That's a lot to keep up with.

4b.  Policy enforcement should never shame a student.  It's a policy.  You are a teacher.  Figure out how to request compliance without shame.


5.  What if I disagree with my school's dress code?  Come up with a better one and submit it to the school board.  If you want to be taken seriously, consider dressing professionally for the meeting!


A Final Note on Modesty

The reason for this post is that I’ve been seeing some sometimes ridiculous and sometimes thought-provoking discussions on modesty lately as it relates to dress codes at schools and even at a variety of church-sponsored events.

Modesty in dress is a very interesting topic.  It has moral overtones, sexual undertones, and is in every way relative to context (are you at the beach or at the symphony?).  Its requirements change with age, marital status, and body type.

But true modesty isn’t really about clothing at all.  It’s a state of mind.  Clothing is only one extension of that.  Dictionary.com says modesty is:


Do we dress to flaunt our wealth, our taste, our body in a na-na-na-na-boo-boo sort of way?  I hope not. Nobody likes or respects a show off for long.

When deciding how you will clothe yourself, do you consider what you are communicating?

3/4/2015 update: check out THIS amazing visual commentary on skirt lengths and what they mean.