It's somewhat ambiguous, but the definition of affordability has to be related to income, right?
Income as well as other debt & obligations.  But then we're getting into personal details...

Whose home are we talking about?  The queen of England?  A single parent in Bangladesh? An extended family of twenty-five in Sicily? 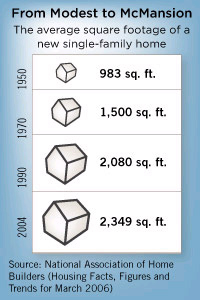 I guess for the purposes of the post we'll make an assumption of a middle class American family.
Our modern standard of living has risen so high in the last couple of generations that most of us cannot even comprehend the living conditions of our own grandparents!

Should we feel guilty about this?  I don't know much about guilt;  I'm not really a fan of guilt as a motivating emotion. But I do think I can say unequivocally that we should aspire to:

House Price as a Multiple of Earnings

To judge affordability of the housing market, some metrics compare the average home price and the average salary in a given are.  For example, in 2014, the average London home cost 16x the average Londoner's salary.  Averaged across England that multiple dropped to 10
But just the previous year, the multiple in the UK was 7.0, with counties averaging from 5.92 to 14.35.
Interestingly, the housing federation doesn't assert what affordability ratio they see as acceptable.  Only that in the 1960's the ratio was at about 4.5.

I read a book on personal finance last year called The Total Money Makeover: A Proven Plan for Financial Fitness

, explains WHAT to do with money.  It is a guide to commonsense money management that is currently used as a textbook in some high schools.  The Makeover book is more about HOW to do the things described in the Financial Peace book.
I was totally stunned by the principles referenced and the hows to get there; it woke me up and asked, "What were you thinking?!!"

One of my favorite, and most basic, parts of Dave's collected advice is called the Seven Baby Steps.

0. Stop overspending and get current with all creditors.
(not part of the official steps, but a necessary precursor)
1. Save $1000 to *start* an emergency fund
2. Pay off all debt (except the house) using the “Debt Snowball,” paying off the SMALLEST debt first
3. Save 3 – 6 months of expenses for a full emergency fund
4. Invest 15% of your household income into Roth IRAs and pre-tax retirement
5. Save college funding for children
6. Pay off your home early
7. Build your wealth and give

He calls them baby steps, but by the time you're at step 7, you're there, right?  Financial Peace.


What's this got to do with Affordable Homes?

Now to paraphrase some bits of Dave's advice (from a variety of sources) as it relates to affordable homes....

Buy your home for cash.  Save up until you can afford to do that.
What?  Who does this?  I find it to be a bit absurd, but only because homes are so stinking expensive.


Or Get an "Affordable" Mortgage

If you MUST have a mortgage, only get a payment you can really afford.
Be conservative with terms:  Get a 15 year fixed rate mortgage.  Never a 30 or 40 year, never an ARM or a balloon mortgage.
Remember that banks are in business to get money from you.  Do not take their advice on how much debt you can bear.
For the path to Financial Peace, Dave says that what's AFFORDABLE is a mortgage payment that is less than 25% of your NET* monthly income.

The above percentages give vastly different answers as to what is supposedly affordable.  Remember that the banks are allowing you to borrow as much as they dare.
What happens if you apply for and are "awarded" (!!) a payment that is twice what you can actually afford?  Exactly.

If you have a mortgage, pay it off early (Baby Step 6).

Don't pay out interest you don't have to pay out simply because that interest is a tax write-off.  Do not get a 2nd mortgage or a home equity loan... that's going in the wrong direction (towards more debt).
Mr. Ramsey has a mortgage payoff calculator on his website to help you figure out how to pay your mortgage off early and reduce the financial hemorrhage.


Now go out and find an Affordable Home

Seems simple, right?  All you have to do now is find a home that meets the financial criteria and is a great home in a neighborhood with great schools or nightlife or farmers' markets or whatever you're into.

Easy as pie; but who thinks pie is easy?


Update 7/16/2015: Tenants in England Spend Half Their Pay on Rent
Also, section above on the Affordability Ratio added.

Email ThisBlogThis!Share to TwitterShare to FacebookShare to Pinterest
Labels: affordability